His name was Jay Gatsby and he threw the most lavish parties.

I know I’m a month behind the times, but I finally watched Baz Luhrmann’s version of The Great Gatsby, starring Leonardo DiCaprio as Jay Gatsby. Oh how I would’ve loved to live during the great Jazz Age just to experience the booze, the dancing, and the fashion of the roaring 20s. Who doesn’t want confetti dumped on them from a huge champagne bottle?

The movie was a spectacle of bright colors, fast moving scenes, and dramatic theatrics. Even more stunning were the costumes: the dresses, hats, accessories, suits, and hairstyles. Words cannot describe the glorious outfits, which were designed by Catherine Martin in collaboration with Prada and Brooks Brothers. Nevermind if the movie itself was a disappointment and the character development lacking, but at least the costumes and fashions were a feast for the eyes. Martin’s version of the 1920s style translated easily to present day and were freshly modern yet retro at the same time. The soundtrack is also to die for: with Jay-Z as executive producer, the music is worthy of much more than just jazz hands.

Alright old sport, I’ve received my invitation, now all I have to figure out is what to wear to the party. 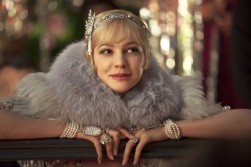 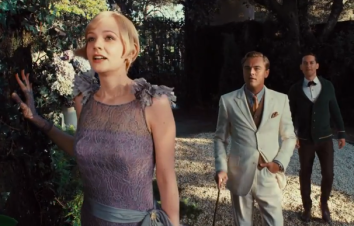 2 thoughts on “The Great Gatsby”