This Valentine’s Day, I want you back. Oh, and I brought sexy back too. 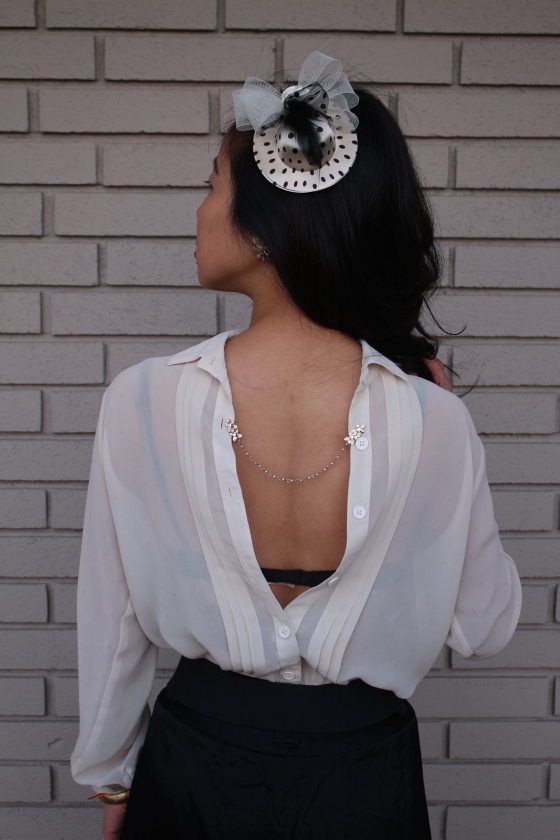 My first infatuation with a boy crush was brief. He was in a band, and I fell in love with him upon watching his debut video on MTV. I’ll never forget his frosted permed hair and the way he moved was so in synch. Like all teenage love, I was only hooked for the first album, then broke up after the summer. That is, until he brought sexy back.

Whether you have been on the receiving end of a break up, or were the one doing the heartbreaking, I’m sure we can all agree that relationships are complicated. Break ups can mean good riddance to a coupling that was doomed from the start. But sometimes all you need is a little bit of time away to make you say I want you back, even if it might be as fleeting as a fashion trend. Like star crossed lovers, some trends you part with are gone forever, while others return years later, manifested in a different form. That’s what the backwards trend is all about.

This trend emerged from street style fashionistas last autumn, raising a few eyebrows while being hailed as the latest fashion must try. Is this fashion forward thinking backward?

Luckily, this is a no-strings-attached one-night-stand type of trend that’s easy to try because it doesn’t require investing in a new must have item. Ladies, just look in your closet. I’m sure you have a button down lurking in there behind all your shoes and emotional baggage.

And just like how I’ve heard single girlfriends describe the guys from the dating scene, I’m not sure how I feel about this fashion trend. It’s a little uncomfortable and impractical but the unconventionality of it makes it so exciting and unlike any outfit I’ve ever worn before. It doesn’t quite fit well, but I’m having fun with it, so why not see where it goes?

Save for the rouge painted upon my puckered lips, I ditched the cliché red and pink color palette and opted for my favorite vintage sheer blouse in an outfit of classic black that proves to be just as cunning. When one dons a backwards blouse, one has to accessorize accordingly – wearing a necklace backwards or adding a vintage sweater clip as I did draws attention to the sultry open back. The sheer fabric hints at a lacy brassier underneath for eyes to see, while the palpable silk shorts and fishnets create a sensual stimulation to roaming fingertips. If that doesn’t tickle his fancy, well, I’ve got a feather on my mini hat that’ll do the job.

Whether it’s to get your ex back, to entice the person you’ve been admiring, or simply to spice up a longstanding relationship, it’s time to leave the cleave and bring sexy back. 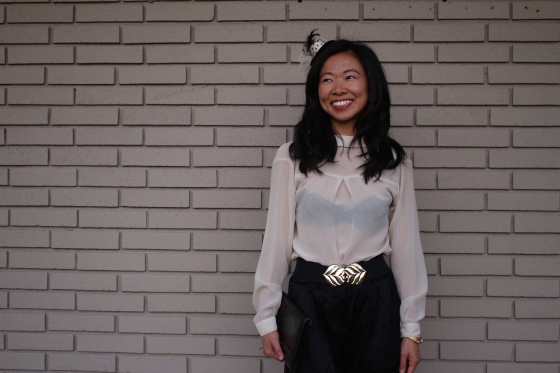 I hope you can agree with me that there is much to be thankful for in life. If you have decent friends and family (minus the crazy aunt), then chances are you already have come up in life. But sometimes the going gets tough, and when it does, I often remind myself that things could be worse. And by worse I mean succumbing to gym clothes for Thanksgiving dinner.

Yes, stretchy gym clothes are quite comfortable, I agree. Yet gym clothes have their place in the gym, and there are alternative ways to stay comfy without compromising style. Whether you’re attending a Thanksgiving dinner with family, or enjoying a potluck Friendsgiving, be sure to steal the feast’s spotlight by being a feast for the eyes! Who says you can’t be well dressed while being well fed?

Turkey, stuffing, and cranberry sauce will be consumed, with food stains sure to follow. Black will be the color of choice. Not only can it withstand the stain of spilled red wine, its slimming effect will be much relief after so much gluttony.

Between a figure forgiving shift dress or a glammed up pair of jogger pants, the choice is up to you. Just remember that gratitude is the best attitude, so wear it on your sleeve. 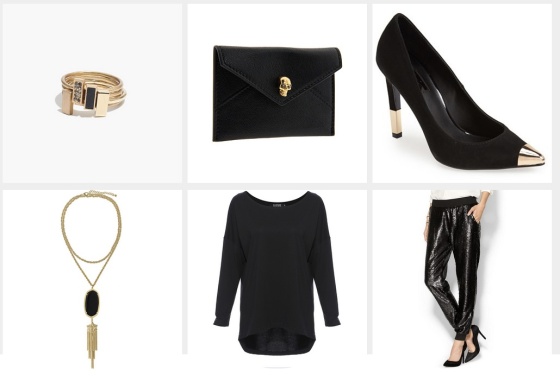 As much as I’d like to believe that I’m artsy fartsy, I can’t say I’m in the know of what’s hip and happening in the art scene. However, as the occasional museum goer, I do appreciate aesthetically pleasing things. It’s hard for me to name my favorite art genre, but pop art is one category that easily pops into my mind.

Pop art was a movement that started in the 50s and 60s that challenged the norm.
The conventional art form at the time was fine art, which was generally very elite. Pop art was a countermovement to this, with the attitude that art should be accessible by everyone. Pop art employs the use of everyday commonplace objects and elements found in consumer culture and poses them as art in satirical ways – thereby making art more easily attainable for the average person. Famous pop artists include Andy Warhol, Richard Hamilton, Roy Lichtenstein, and many others. 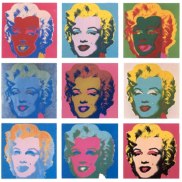 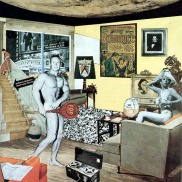 Just what is it that makes today’s homes so different, so appealing? (1956)

I recently attended a pop up shopping event, and among the sea of vendors, one particular shirt popped out at me. Indeed it was the vivid pop of color that caught my eye – it was a Roy Lichtenstein wannabe and I wanted it to be all mine. Lichtenstein is well known for his satirical humor based comic book inspired artwork, recognizable by his signature use of Ben-Day dots.

Drawing inspiration from this copycat Lichtenstein-esque tee shirt, I applied his comic book technique to my outfit and Ben-Day-ed myself. The polka dot scarf, the black and white multi-strand beaded necklace, and the perforated clutch bag all spotlight the Ben-Day dots and dotted embellishments all over the tee. Now

I love this look more than anything… 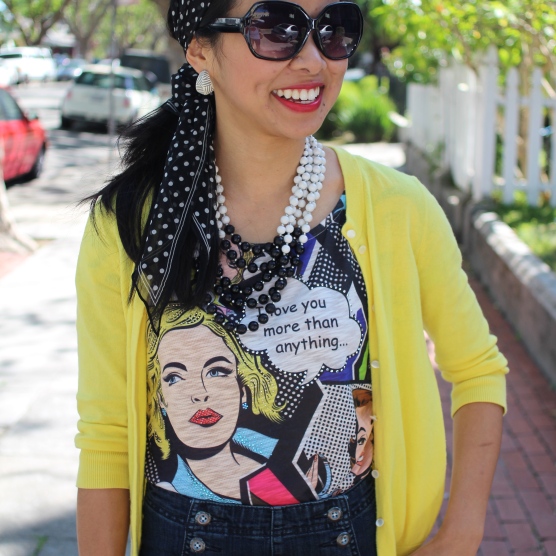 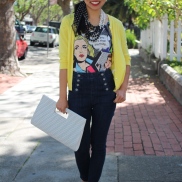 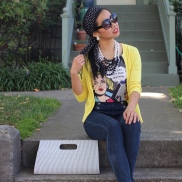 You better get some (peplum).

Peplum is no spring chicken, for it has been around the block (and then some) with origins dating back to the 1800s. It became in vogue in the 1940s, and had resurgence again in the 1980s. With each decade, the peplum reinvented itself into different forms, but by definition, it has always stayed the same: a peplum is a short piece of fabric attached to the waist of a jacket, dress, or blouse, and is usually gathered or pleated to create some volume. 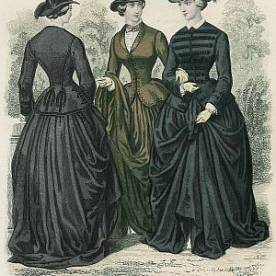 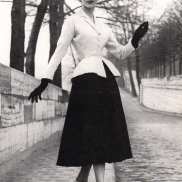 2014
Only time will tell whether it falls off the fashion radar again. Nevertheless, I will always love peplum. It is one those style elements that seem to be universally flattering on all body types as long as the right length and volume is chosen. Peplum minimizes the waist and celebrates a woman’s curvy hips, making any outfit fun, flirty, and feminine.

What does one wear with peplum? Since it is nipped in at the natural waist, and flares with such flounce, the peplum is best balanced out with something high waisted and slim and trim for the bottom.

This top lent from my friends at Lalakitty hit all the right notes. The combination of polka dots, peplum, and low revealing back makes me feel demure and alluring at the same time. Lalakitty is offering Chic Vic readers 20% off your entire order – just use code CHICVIC20 and you too could be peplumming.

I paired the top with my sweetheart locket necklace, my favorite pair of high waisted jeans, and a pop of red in my belt and flower corsage. Add a headscarf knotted in the front and a sexy pair of peep-toe pumps and you can call me a bona fide pin up girl.

Watch them boys don’t know how to act cause this top puts the “back” into sexy back. But I ain’t no hollaback girl though. 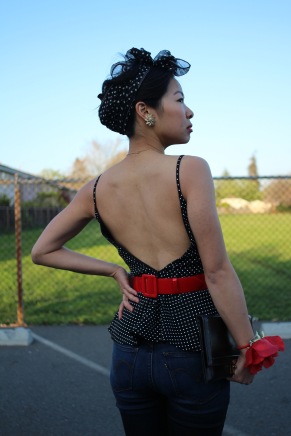